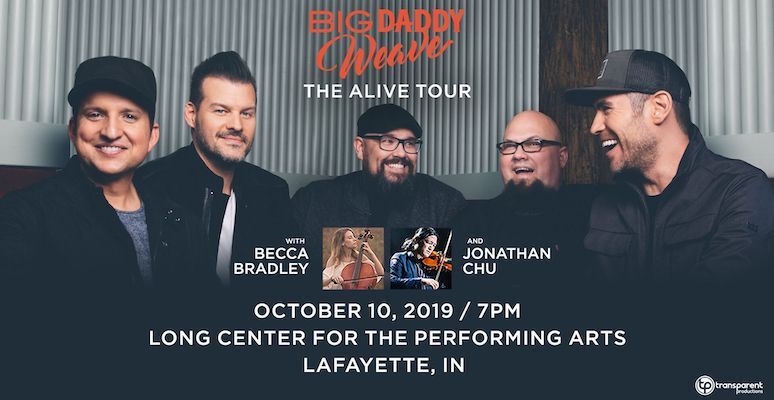 Premium ticket holders will receive first entry, premium seating in a reserved section, a premium guest tour laminate, and participate in a pre-show conversation with Mike Weaver of Big Daddy Weave. With the band releasing new music, a television show, and a new book, Mike will share stories from this exciting season and take questions from the audience.

General Information: All ticket prices subject to $5 increase when purchased at the door. Children 3 & under are free if they will be sitting in a lap. Purchases are non-refundable.

Big Daddy Weave is one of the top artists in Christian music: they are one of the genre’s biggest headlining artists, the second most played artist at Christian AC-Monitored radio in 2014 and the recipient of multiple industry awards and nominations, including: Dove Awards, K-LOVE Fan Awards, Billboard Music Awards and ASCAP Awards. Between 2012 and 2015, Big Daddy Weave has achieved five straight No. 1 singles at radio, the most recent being “My Story” from the 9/18/15 album, Beautiful Offerings, and the previous four from the band’s career best-selling album, Love Come To Life. “Redeemed” was certified gold by the RIAA in 2015. Big Daddy Weave has career album sales of more than one million units. Formed in 2002, Big Daddy Weave is: Mike Weaver, Jay Weaver, Jeremy Redmon, Joe Shirk and Brian Beihl. More information can be found online at www.bigdaddyweave.com.

Please note the Long Center is a historic venue. There is no elevator to the balcony level.


Long Center for the Performing Arts